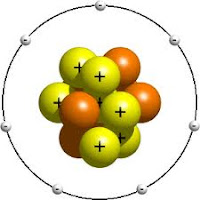 From both the above laws daltons expressed the opinion:
1. Atoms are the smallest part of the material as it can not be subdivided;
2. Atom is described as a very small solid ball, an element has atoms are identical and differ for different elements;
3. Atoms combine to form compounds with a ratio of integers and simple.
For example, water consists of hydrogen atoms and oxygen atoms;
4. The chemical reaction is the separation or amalgamation or a rearrangement of atoms, so that atoms can not be created or destroyed.
Indonesian Version
Previous: FREE HOST UNLIMITED
Next: ATOMIC NUMBER, MASS NUMBER, ELECTRON (NOMOR ATOM, NOMOR MASSA, ELEKTRON)