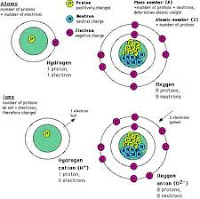 At the shortest approach to the initial kinetic energy K of the total particle energy is converted into electrical potential so that at the time: