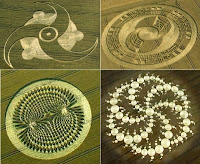 Crop Circles are a phenomenon that often occurs in various parts of the world. Phenomena that occur so long since this has made an unresolved question mark until now. Not only in the regions of Europe, this phenomenon had occurred also in one of the main regions in Indonesia precisely in Sleman Yogyakarta, which provide clarity about the power of the creator (Allah).

Some of the reasons why this phenomenon occurs, of course, a big question mark. Because some studies have shown that it is not possible if a phenomenon is made ​​by humans.
Here are some of the phenomena of crop circles that have occurred in the world :

Whether or not happened to crop circles caused by strange creatures such as aliens, “It is proof of the power of the creator that there is no word impossible to create something that was never expected before and never entered the human mind or common sense”.